We could have been the 'People of the tanks'

I guess most of us will be saying, "what is he talking about?" But, that is just it. Bangalore is set in a landscape of a 100 tanks (for a lovely insight read the book "Deccan Traverses'), has had a history that recorded for over 400 years.

Many of us know of the lakes around Bangalore, but that is part of the change brought in by the limited understanding of our administrators and planners. The system stretches from beyond the Northern boundaries of our city limits and goes beyond the point where Cauvery plummets many levels at Sangam, making all of us in the lands of Ramnagaram, Maddur, Mandya and Srirangapatnam inhabitants of this landscape. Even more significant is the fact that this fabric of tanks is a result of human actions. Yes, all of this is man-made! The will of the people made this landscape and it is the lack of it that is fast erasing it. 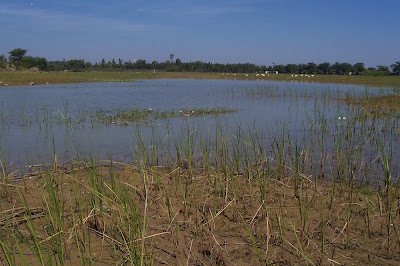 So why 'tank people'? Well, it formed the very life fabric that sustained this slice of civilisation. Each village/ hamlet had a tank of its own or shared a large one. These tanks would fill up during the monsoons and drained out water through a system of overflow valleys. The tanks would loose their water through the dry months, some completely and would leave large amounts of silt behind (a result of sedimentation). This silt formed crucial building material, for mud mortar/plaster and even for earthern walls, and was also used for agriculture as a nutrient rich soil. Most importantly, these tanks would help in recharging the ground water table. Potentially, these tanks can help in sustainably recharging rainwater for over twice the current population!! The landscape would change with the cycle of seasons, the tanks filling up during the monsoons and transforming into silted depressions for the drier months. This was the same space that we now occupy.
So where is this land that our city is in today?
The death knell was sounded by some interventions during the colonial rule... the closure of tanks, the conversion of drain valleys into narrow nallahs... stone lined channelways. Then came the babus and state government planners (post independence) who did more damage in the last 60 years than in the 200 plus years that the British occupied this land. Closure of tanks, treating them as lakes (completely misunderstanding their purpose and characteristics), and reducing this system to a pale reminder of the past.
So what is different?
The most significant change is that of identity and association. The link between tank and habitation has been forgotten. We no longer see them as great catchments of precious rainwater runoff. The nallahs, once percolating drain valleys, have been concreted and thinned clogging the system, or, encroached upon... causing great damage to both life and property every time we have even a good shower. The change in attitude is very visible in the health of these nallahs and tanks. They stink, sewage flows illegally into these systems in innumerable points. Many tanks have also been converted into permanent water bodies.. with stone masonry walls and pretty landscaped gardens to 'beautify' them. Probably the greatest change was the import of water to feed this city's population (executed during British times) from over 100 kms away near Mysore and therefore pumped up to over 900 feet! .... something that was never done for centuries before. Arguably, the population has also increased multifold over the last 100 years, but how do we explain that we had a water management system that could cater to twice the current population? This turning of our backs on a constant sustainable rainwater collection and recharge system combined with a callous and greed driven boring of our aquifers has resulted in falling groundwater levels.
This has changed the very way we live... our water comes from an unseen source (almost magical) so we dont see the link between these tanks around us and the water in our taps. The governments constant crowd pleasing statements of increasing supply 'to' the city has always conveyed the message that the solution for our water woes lies outside this system. This complete faith in long piped systems is also reflected in the city's wet waste treatment plants, large systems that are supposed to handle and treat the sewage from large quadrants of the city. This has also had an impact on the water equation of our city. Nearly all the water consumed by the city's inhabitants is drained out (inefficiently) only to be treated and led away from the city. In the original system, all waste water would find its way into the ground, filtered through rear yard broad leafed high-capillary plants and through the various layers of the earth.
Just take a look at that. Water was captured right around where people lived, allowed to filter into the ground, drawn out through open wells... and was recycled after consumption through a biological treatment system, again within the habitation limits. (of course, people did not waste great volumes of water in flushing)
This is what we today call a sustainable water loop. There is still hope, i think. The steps are obvious.
Posted by Harsha Sridhar at 7:17 PM