Lessons learnt for building design from the experience of driving 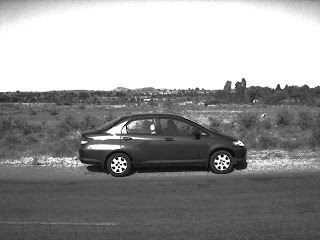 How many of us have had this experience? Park the car out in the sun and return after a couple of hours.... and we reel back due to the excessive heat within.
To counter this, we do two things:
In both cases, we have a great level of comfort that is achieved, at least when we compare this to the very first experience. Now let us look at both these changes to the situation closely.

The first instance, where the car was parked in the shade benefited due to the reduction of direct incident radiation. Nothing else changed, only the external environment was modified by introducing an obstruction to the direct sunlight.
The second instance, where the car was parked with the windows slightly down benefited due to the hotter air being vented out from the upper portions of the car, where this internal air is hottest. Nothing here was changed, only the body of the car was made to breathe.
Cut to how a building works for a bit. The body of the car can be compared to the building shell- the walls, the roof, the windows, etc. The windows of the car are akin to the openings on a building- windows, ventilators, clear storeys, etc. How the skin of the car works in affecting the internal thermal environment is comparable to that of the building shell. 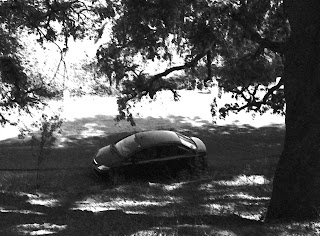 If we consider how this shell works in keeping the car thermally comfortable, we find that in most instances it seems to fail, as in the example given above. The point that I am making is that the entire shell of the car (the insulation included) that was meant to manage the gain of heat (in hotter climates) and the subsequent loss of coolth (yes, it is a word in the HVAC industry)  from internal air-conditioning, was inadequate in doing so. I wonder (humour me for a bit), if we had designed cars with a secondary shade providing shell (forget the aerodynamics for a bit), perhaps with perforations (kind of like a jaali), which would perform like a self venting system of sorts, would we have reduced the insulation that the car would have ordinarily needed? Could such a cutting off of direct heat radiation also have lead to a reduced usage of air-conditioning?
Let us now apply the same logic to how a building is designed. Current practises take into consideration local climatic conditions and then design the building shell with materials (or composites) with the desired u-values to ensure an appropriate thermal flow balance. Like in the case of the car, this extra insulation of the building can be reduced by first starting with a modelling method that adopts aspects of shading and venting on a shell with conventional specs. In hotter climates (like most areas in the plains of India) where it is all about keeping the heat out, this would apply greatly.
A double shell  for instance could also be designed to provide extra strength.... a greater base level of air-exchanges would also ensure better internal air quality.... and eventually, a building so designed would end up spending less on air-conditioning costs.
Similarly, other thermal comfort influencers like humidity, can also be addressed by drawing on such parallels/inspiration. Ever wondered why when it is uncomfortably humid, and you are driving, you feel much better, by just rolling the windows down? The breeze helps remove the perspiration, and one starts feeling better. Now, in the building context, when it is humid, all one has to do, is to induce such an air movement. It is not necessary to jump straight to air-conditioning.
Many of us hasten to switch on the AC in the car and do so primarily because we cant stand the dust and pollution of our cities. A similar scenario of dust is played out in buildings, and somehow and air-conditioned environment is always seen as the universal solution. When all we needed was a dust screen! We know that plants perform that role and so do artificial louvres and 'jaalis'. Incorporating such measures would surely address dust control but don't you think that it could also add some vitality to otherwise banal façades?
So, what say we take one hard look at the experience of driving and how we deal with thermal comfort...again?
Posted by Harsha Sridhar at 8:24 PM No comments: