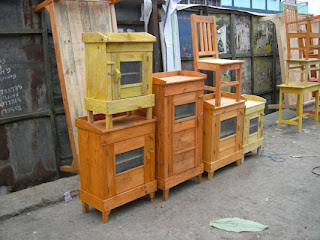 You could buy packing wood (or deal wood as it is know here in India) in many of our older wholesale market areas. Considering the huge quantities being generated as a result of our growing economy, we need to start looking at this as a good resource. This wood is susceptible to borers and termites, but simple treatment and only specific uses should resolve that matter. For example- for internal door shutters and for interior woodwork. We find that this wood can also do decently well in outdoor use, with simple linseed oil treatment and similar such methods. Take care to pick the redder of the varieties, which indicates a high content of natural oil already in the wood. The paler versions only mean greater treatment.
Of course, the Indian situation is better- in the sense, we recycle much of this waste. Already, much of poorer India uses this material for their meagre furniture and other woodwork needs, but surely we can put it to better use...
This very argument can apply to the reuse of reclaimed timber from demolished homes, discarded furniture, and many other kinds of waste. All one needs is an open mind, and the intent to reduce our collective ecological footprint.
Posted by Harsha Sridhar at 7:24 PM 1 comment:

Perplexed about a lack of imagination...

I have always fretted and fumed about this, but two things triggered this impulse to write about this. One was the inauguration of the 2010 Commonwealth games at Delhi, and the other was an article by Suhel Seth in the TOI (writing for Lavassa Cities).
The former example was resplendent with imitations of what others had done, and the usual repetitive themes of pan-Indian culture. The latter waxes eloquent on the sheer lack of imagination amongst architects and designers.
Do we really suffer from a lack of imagination? How? or rather, Why?? In a country that needs over 256 million colours to paint it and a land of innumerable stories we suffer from a interesting themes to paint and stories to tell!!! Our airports, our stadia, our shopping complexes, our offices, the homes we build, our parks, our streets, all are examples of rip-offs from the shiny west.
What drives us emulate imported models without questioning their appropriateness? Clients? The big bad market? Or, is it simply an easy alternative to what we perceive as reinventing the wheel?
What if:
I am sure you can add much more to this list.
Without a doubt there is a great deal of national pride in who we are, but the expression that we lend to our architecture does not compliment that position. I would not want to sermonise anyone on how we can dream of architectural expressions, forms, types, etc for the various regions and sub regions of this country, and would only hope that we find our ways to do our bit.
Posted by Harsha Sridhar at 7:13 PM No comments: