All it took was the will to do something....

Here is something to exemplify our mindsets towards easily addressable, everyday issues. The community that I recently shifted into (Aug 2009) was where most of the residents knew each other for over 15 years.

The night I moved in I discovered (to my sheer horror) that if it rained even the least bit the entire area in front of my house gets flooded. I spent the next few days engaging with my landlord, my neighbours and the 'residents association' determining the magnitude of the problem and what their plans were to solve this. Beyond the usual discoveries of a bad layout plan, encroachment on land and blocking off of natural drainage, I also found out that the six families (of the 82 that formed the enclave) that stayed around me had tried in vain to address this but their cries for help fell on deaf ears. Replies ranged from, ".... we have forwarded the complaint to the BBMP", to, ".... how is it my problem?" and "...nobody will pay so much when it does not affect them". 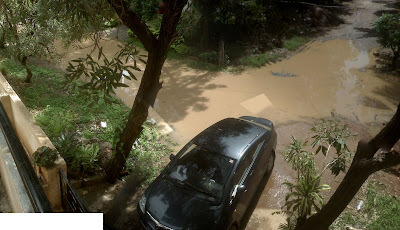 The situation had reached such a stage that my neighbours had started modifying their lifestyles to 'live' with a flooded situation for a few months in the year. While some waded through the water to cross over to dry land, the more inventive ones had placed stepping stones to hop across their watery frontyards. My landlord had even been ill-advised to put up a metal mini gate to hold back the water... a kind of check dam!! My neighbour had increased the height of her sump cover to ensure that water did not enter. The more desperate amongst them (tenants like me) had simply shifted out. This situation had now lasted for over 4.5 years.
I gave my landlord and myself about a month to try the 'reaching out' one final time. When a month and a half passed I called my landlord and requested him to organise a meeting of other landlords and tenants to discuss possible solutions. No one was interested. Some had given up. There was an underlying fear that any solution would cost a lot. This was further influenced by their conviction that resolving such things was the problem of the authorities that be.

So I went ahead with finding a solution myself. I had been taking pictures of the flooding over the month or so that I had been here. I determined the local drainage and slopes, the volume of water that collected on different days and scoped out areas where I could divert the water. I had two choices- one, to drain out the water away from this low-lying portion of the enclave, or, two, to percolate the water into the ground. The latter seemed the more attractive and easier choice (sort of).
The volume of water to be tackled (about a 40,000 litres of water in a moderate shower of rain), the area required and the percolation properties of the soil there were my variables. I found that the land sloped across the road to a common, neglected strip of land (about 3 metres across and about a 100 metres long), and I found through a simple infiltration test which showed me that I could percolate about 3,000-4000 litres of water an hour. 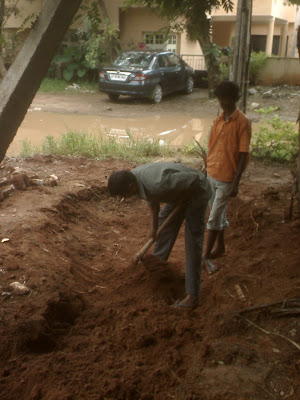 I employed a team of 4 labourers, cleared the common land across the road. This had become a dumping ground for all kinds of muck from the very same homes. It took us 5 days to dig a trench about 1.5 metres in average width, about 0.6 metres in depth and about 15 metres long, another day to make a detail (using some waste drain pipes) to divert the water into the trench, yet another day to line the trench with gunny sacs (reject from a local departmental store), and a final day to clear the road and surrounding area from slush generating silt/earth and fill the potholes with 10 mm stone jelly. In all it took 8 days.
To increase the percolation, two concrete rings (3 feet in diameter) were inserted in the wider section of the trench. A layer of stone jelly was filled around the concrete rings adding a filtering medium of about 10 cm. Care was taken to provide a block at the holes on the ring to keep the jelly from pouring in.Now I intend planting around the entire trench, providing a couple of benches made from waste stone and construction debris (from a house being built nearby).... creating a positive space for the community.
Does it work?? Well, it handles a normal rain of up to 8 mm in a couple of hours with ease. Heavy rain showers do create the ponding effect, but it all this water percolates over the next few hours (I have added the picture in another post). The system has been tested by many days of rain, and the nearly an entire rain cycle in the year.... We dont have the nightmares of water standing around for days (yes, we do have to live with that for a few hours)... and the community now recharges about 40,000 litres of rainwater in a normal rain shower.
What else can we do to better this system? To solve the issue of any ponding (once and for all), we would need to increase the capacity of the initial holding system. Which would mean percolation pits, tanks, wells that would hold a volume of about 40,000 litres of water. I have plan to start on that soon.

All it cost me was Rs 5,600/-... the irony was that this was less than what it cost my landlord with his mini check dam and my neighbour's sump cover remodelling.
A return to normalcy, a reduced mosquito menace.... an end to about 5 years of woes.
Posted by Harsha Sridhar at 8:03 PM