What sets us apart? Clues to what makes communities sustainable- Spaces

This post marks the second of a series with one common theme..... highlighting the areas of living that set us apart from the way/s we lived in the past (and in some traditional/rural settlements that still persist), and which also mark us as unsustainable communities.Here is the second. 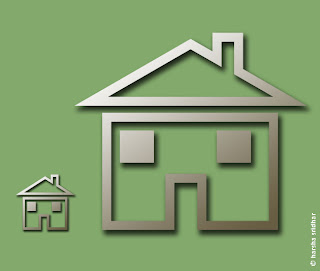 Who doesn't like, appreciate or even want a palatial bungalow? What is there not to like.... unless you are thinking of the maintenance costs and other costs of residing in a place like this. Space by itself has become a statement of class. Take a look around... the various peddlers of real estate scream out at you dishing out the larger living rooms, the larger bedrooms, and even larger dining tables.... all for a similar sized family unit. Even the specifications are near similar... the difference however, is the price. Nowadays, there seem to no bounds to what one 'wants' as space, expect perhaps the depth of our pockets.
There are some odd outcomes though..... if one buys into a builder development, then the volumes seem to have shrunk. Wonder why? Floor-to-Ceiling heights now hover at a near universal range, between 9.5 feet to 10 feet. What is ironical, is that this remains nearly the same no matter which city, or, geography we live in. This reduction in space (also reflected in the thinness of walls, is due to the builder maximising on achievable floor area. Most individuals building their own homes would do the same mainly because of costs.... be it due to the direct costs of extra material or due to the paucity of space.
How does space matter? A larger volume would mean more air to warm or cool. Too much or too little space could mean 'thermal discomfort'. Ever wondered why volumes of human habitation shrunk in extremely cold regions.... a lower volume meant lesser air to heat up, and lesser surface area exposed to the outside. More significantly, the heights of these spaces were always kept low.... to prevent any heated air to rise above. In humid regions, the spaces would not be bound, and would allow the free movement of air bringing comfort to the inhabitants. Along the same lines, higher ceilings were common in hot-dry conditions. To further aid this, courtyards were integrated to create a kind of thermo-siphon, venting out the stale hot air from the adjoining spaces, which in turn drew in fresh cooler air from the outer faces. In some cases, Jaalis (delicate stone carved screens) were provided on these outer surfaces, which absorbed the heat from the incoming air. Semi-covered and open spaces played as important a role as covered rooms. Verandahs provided shade in hot regions, and performed open to the breeze spaces in humid regions. Open terraces were rest areas in the hot nights of the northern plains. 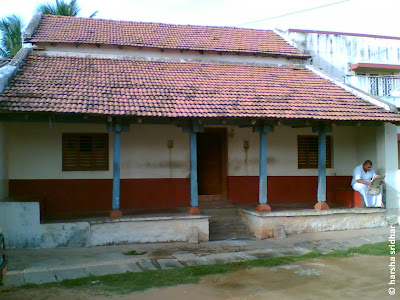 Through history, the larger consumers were always the wealthy and ruling classes, and the masses lived in far humbler accommodations shaped by what their need and the hand-me-down knowledge systems. Uncannily, the building forms and methods were also sensible architectural outcomes for each specific geography.
Forget palaces, forts, tombs and temples for a bit, but when one thinks of traditional settlements space and form seem to vary from one region to another. What is starkly different when one compares much of these vernacular forms to present day times is how things were never over-sized. Perhaps the reason is obvious. More space meant more material to provide for an envelope, to provide for finishes and for other aspects of insulation, etc.It also made sense that there was a lot of manual labour involved in the movement of material, and therefore restricting the quantities needed made sense. I am guessing that was one of the prime reasons why material was not moved from very far (surely energy of travel did not figure beyond a monetary sense). Nonetheless, there are lessons here for the these times. In some ways, it is still evident today, in areas which are poorly connected by roads.... a boon if you ask me.
Space also has a clear impact in terms of Aural quality, light quality,and even affect our psychology (I am not referring to any Vaastu/Feng Shui psycho babble)... Many of us know the feeling of claustrophobia in small tight spaces. However, each of these have to be seen in conjunction with other aspects of other finishes. For example, the density, geometry and smoothness quality of the surfaces have an impact on the reflective quality of a space; the size, direction and nature of opening has an impact on light and air movement.... and therefore inside temperature. Shapes of any enclosure may also mean an interesting impact on you both financially and psychology. We already know that more surface area, the higher exposure to the environment... therefore more heat gain or loss, and more surface exposed to rain. The larger the space, the heavier the structure..... therefore greater the anchorage or sizing of foundation. 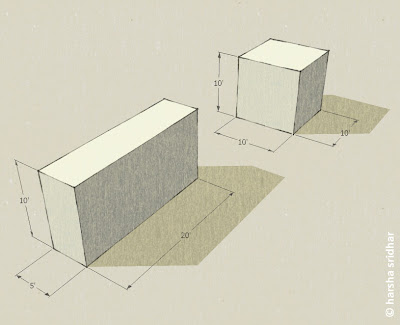 I did an interesting exercise once (thanks to a great teacher I had the opportunity to work with); I compared two spaces with the same area, one a square and the other a rectangle.... I found that the square space would less to build than the rectangular space, assuming they were built using the same methods and systems. Why? The answer is pretty simple really (once again, not some un-understandable explanation of energy lines and directions, which once cant get). The square has a smaller perimeter than the rectangle... and therefore the total wall area (keeping the height the same) would also amount to less. Extend this to less openings required, etc. Less materials per square foot, and so lower costs. This also meant that the square space was less exposed to the elements, and therefore gained and lost much less heat (if oriented similarly), meaning lesser internal temperature changes, providing for a more comfortable internal environment. You can see how space could also affect health.
I am not advocating a standard usage of square shapes as a result, but only emphasising the need to understand the impacts a space could have on us. From a sustainability point of view, traditional buildings had the advantage of having evolved an architecture with region specific forms and hence a more appropriate building vocabulary. Isn't it time we reconnected once again?
Posted by Harsha Sridhar at 4:40 PM